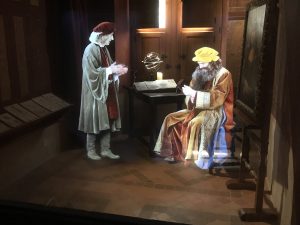 I was privileged in this, the 500th anniversary of Leonardo da Vinci’s death, to visit the chateau in Amboise, France, where the Renaissance master came to serve as first painter, engineer and architect to King Francis I beginning in 1516. Leonardo had, by most accounts, worn out his welcome in Florence, Milan and Rome, where his powerful patrons either became disillusioned with how many commissions he left incomplete, lost power in wars, or became ill and died over the course of Leonardo’s then-64 years.

But the King (Roi, in French) recognized the artista‘s rare talents during a visit to Florence. Leonardo had ingeniously designed an autonomous mechanical lion (the first known self-propelled robot) for the express purpose of currying the young Roi‘s royal favor. Francis recognized an opportunity to enhance his own reputation as a cultural patron with this Italian artist-engineer-architect-impressario of notable reputation to enhance his own glory that of his country.

In my research for the Edge of Yesterday series, I have stalked Leonardo in books, online and on film, and in exhibitions in the United States and in Italy. Needless to say, it was a thrill to visit the château, Clos Lucé, in the Loire Valley’s medieval city of Amboise, and more thrilling still to learn that we were staying at the AirBnB of Laurent, the 18-times great grandson of the notary who drafted Leonardo’s last will and testament!

A tour of Amboise in photos. Please note that the 104-degree heat during our visit and a lack of air conditioning rendered my picture with Laurent looking a little wilted, but the King’s Royal Château, across the river behind us, partially expanded under Leonardo’s direction as engineer and architect during his sojourn, still luminous.

His home has been restored with facsimile’s of his art, scientific explorations, and inventions, including a tank design based on observations of the turtle in his shell, a modern-day bicycle design, and a refinement of the printing press with its movable type.

Leonardo died in Amboise in 1519 at the age of 67 (quite old for his time). There are rumors that he is buried elsewhere in the city than his official resting place in the Royal Church of St. Florentine chapel where a stone with his name commemorates his final resting place.

Laurent and I melting in a freak 104-degree summer heatwave in the Loire Valley, but the Royal Chateau behind us still looking luminescent… 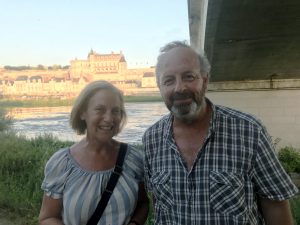 At the entrance to Clos Luce, the French chateau where Leonardo lived out the end of his days… 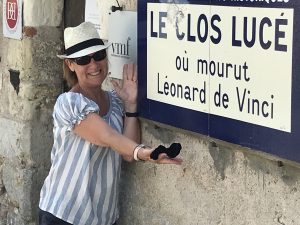 …it is a beautiful brick mansion where the kings and queens of France lived, before Leonardo, now a museum… 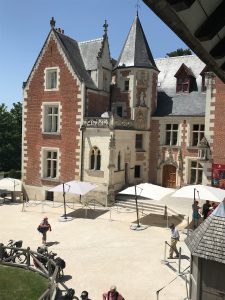 Here is the artist’s atelier, or studio. Leonardo mixed paints and chemicals in his experiments with paints and pigments, some of which, like The Last Supper, were an #epicfail 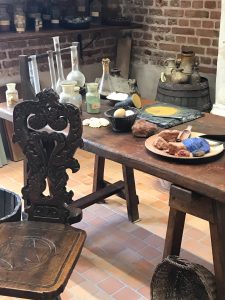 The Maestro’s notebooks included his designs and notes for engineering projects and sketches on such varied topics as the flight of birds, how to make a better catapult, and even included his dinner shopping list (paper and parchment being scarce and expensive commodities!) 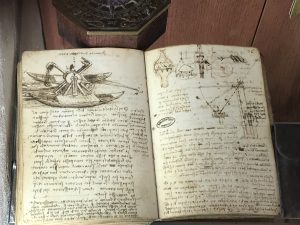 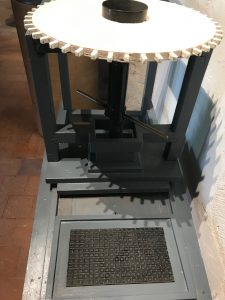 A tank, to be propelled by human power, and modeled after–you guessed it–the turtle’s shell! 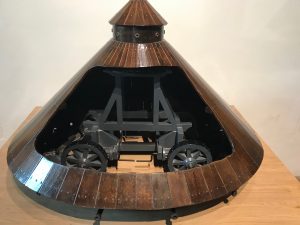 The first bicycle. Lacking the proper tools to forge a modern chain, the design did seem to include pedals, but it is unclear how they could be propelled by pedalling. And wooden wheels–oof, hard on the tush on those cobblestone and rutted streets! 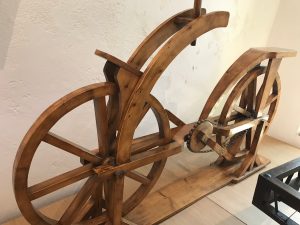 “Alas, poor Yorick”…but no, this was a century before Shakespeare. Leonardo conducted experiments on corpses, and skulls. To get the facial muscles right on Mona Lisa, he worked for years. No wonder her eyes still follow us when we gaze on her lovely face! 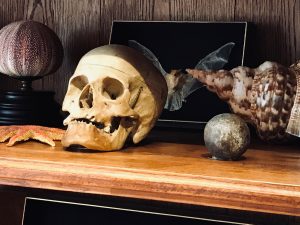 There are two chapels to Saint-Florentin: one on the grounds of the Royal Chateau, where visitors are led to understand Leonardo may be buried…the other, a small parish church in the city of Amboise and where, legend has it, his burial may really have taken place, in a tunnel long sealed and inaccessible today.

So, who is buried in Leonardo da Vinci’s tomb? 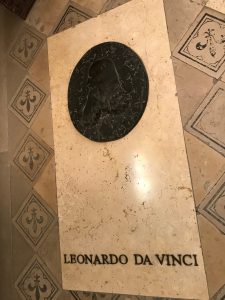 Surely, Laurent, our genial host, who is a direct descendant of the notary who drafted Leonardo’s will, would have the download about which was Leonardo’s true burial place.