I recently came across a delightful poem, “Fictional Characters[1]” by Danusha Laméris, in which the poet wonders this about the great characters in fiction:

“Do they ever want to escape?/Climb out of the white pages and/enter our world?”

As the author and creator of a teen time travel adventure story that crosses over from film script to novel to video to Twitter to educational tool, it’s a question I’m watching play out across all these platforms in some very interesting ways.

Trying to tell a coherent story with characters who, through a science fair project gone rogue—cross 500 years and 6 time zones is complicated enough. What happens when you try to tell a story—same characters, same plotline, same historical, technological and scientific foundations—across media platforms?

And to make the experiment even trickier, adding in social media, where the author no longer controls the storyline, but allows friends and followers to add their own twists-and-turns to the narrative? The “transmedia storytelling” adventure, Out of Time, is continually emerging online and in fiction. The plotline:

Teen genius and da Vinci-wannabe Charley Morton adapts modern technology to travel to 1492 Florence where her illuminated “slate” reveals magic powers. Hunted for witchcraft she must either divulge secrets that will change history or be burned for heresy and, worse, miss winning her school science fair.

Can this modern teen outwit a fanatical mob and get back in time to win the middle school science fair – and what magical alchemy does Leonardo harvest from what she leaves behind?

Amid the many twists and turns of such a complex tale, the one I find most fascinating as a storyteller is the #TwitterFiction version, wherein the audience not only reads but participates in creating the plot.

Where else could our girl hero have a whole conversation with an expert to learn about the earliest excavated evidence of the tomatillo in South America 52 million years ago (related to that key ingredient—tomatoes—essential to creation of her favorite food in the universe, spaghetti pomodoro) and, sadly for Charley, not yet known to Old World Florence in the 15th century? 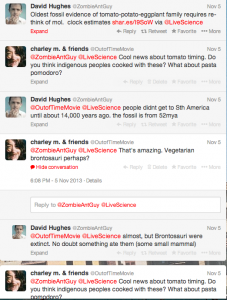 This transmedia-trans-temporal form of interactive storytelling might cause severe dislocation for those not buckled in for the ride. A few of my questions:

I’d like to know what you think. Please use the comments section of this blog to give me your thoughts on getting involved in the story. Or, better yet, tweet along at http://twitter.com/OutofTimeMovie. Here’s a primer on how to direct an online Twitter story adventure:

Oh, and I’m hoping to get together a group of regular tweet storytellers to interact with the Twitter narrative. Contact me to learn how to join our Tweep Storytelling Team at [email protected].

[1] “Fictional Characters” by Danusha Laméris from The Moons of August. © Autumn House Press, 2014.

One response to “Traveling Across Universes and Learning through Story: Engaging in Digital Interactive Storytelling at Light Speed”