Asking the Big Questions: What Makes Us Human?

I, Charley Morton, time traveler and science geek, have set out to record my interview with the great pioneering filmmaker and technology innovator as part of my "Superheroes of History" project.

All the things that make you unique are your superpowers.

Charley Morton: I think it's so cool that you make movies—and they're so different! As a filmmaker, how do you combine science, technology, media and art to show new concepts?

Tiffany Shlain: I'm always really excited about using technology in new ways to connect people, and to engage in important conversations of our day. Whenever a new technology comes out, I'm always thinking, how can we use this to explore some of the deep questions of our world?

Charley Morton: What are some of those "deep" questions?

Asking questions about that is the first step, and applying tools in new ways to ask those questions is interesting to me. The ways we respond keep evolving.

Charley Morton: What are the innovative ways of using those tools that you've tried out?

Tiffany Shlain: I make movies in a way that is very new. And the way we show them is very new. So we make them in a very collaborative way: we write a script, but then we invite people from all over the world to answer questions that we're wrestling with in the film.

It's exciting to me, as a filmmaker, to use things like the cell phone camera, which I think is one of the greatest technologies.

First of all, your phone didn't used to have a camera! Then, for a long time, the phone had a camera, but it only shot outward. Most people don't even realize it, but being able to flip the camera to capture your own image is a big innovation.

Charley Morton: What... no selfies back in the day?!

Tiffany Shlain: Yeah. That was a big innovation and I don't think it got nearly enough attention. The moment that you could press a button and turn the camera on yourself was very exciting because it allowed people to record themselves telling their own stories. You didn't need a camera person... you needed no one else to record your story.

So today, we make what we call "cloud" films because we're using the cloud of the Internet to make and show them. It infuses this whole new sense of humanity because we ask people to send videos of themselves talking about the big questions.

Charley Morton: Do you find there are common themes? How does that work?

Tiffany Shlain: Usually people are very authentic. They speak their truths; that's the one commonality. I think when they can record themselves they're not as self-conscious [as when someone else is filming them]. You feel like you have more power.

Charley Morton: So it's about being self-empowered. I like that! How did you ever get into this? Did you study film in school?

Tiffany Shlain: Film was something that was part of my upbringing. I'm Jewish, but we didn't celebrate Shabbat (the Jewish Sabbath). We didn't have that ritual growing up. But the ritual we did have was, every Sunday we would go to the movies, no matter what. And then we'd go get Chinese food and ice cream.

And the Chinese food and ice cream are the important parts, because we would discuss the movie in great detail, and use film as a way to really talk about morals and who we are, and who we want to be in the world.

So films were this really great device to go deep and wide on the meaning of life.

And even when my parents got divorced, that was the only tradition that seemed to make it through the divorce.

Charley Morton: That must've been rough!

Tiffany Shlain: I was 13—it was very hard on our family.

Charley Morton: But the films and food - that seems like it made a big impression.

Tiffany Shlain: Yes, the experience stuck with me. For a long time, I didn't really think I could become a filmmaker—because I was supposed to become a doctor and I didn't really know any filmmakers that made a living at it—but by the time I was in college, I knew this is what I wanted to do.

And I struggled. It wasn't all easy. For a long time, it was hard for me to figure out how to make a living making films. I ended up paying for my films working in technology as founder of the Webby Awards, honoring the best of the Web. That was a big part of my life for more than ten years, and I'm proud to say that the Webby Awards is in its 20th year now.

But I really wanted to go back to filmmaking full-time, so I figured out a way to do that. I started a film studio in San Francisco, The Moxie Institute. So our second innovation, beyond inviting people to contribute their own ideas on video, is that we distribute films in a completely new way. We call our showings "global cloud film premieres," where we invite people all over the world to screen the films at the same time, and we give them lots of tools for deep conversations.

So in many ways, it's a very expanded version of my Sunday night movies with my family. Wow! I don't think I've ever quite put all those ideas together before!

Charley Morton: From a film shabbat to global screenings of films over Chinese food! That's awesome! So who were your biggest influences?

Tiffany Shlain: I was always very close to my parents. My dad is the one who took us to the movies every week. But he also did things like bringing a human brain to school—he was a surgeon, and a writer. And then my mother was a big influence because she went back to school to get her Ph.D. in psychology when I was growing up. So she was always talking about the inner workings of our biology.

Both of those perspectives led to a lot of my work today. I make a lot of films about neuroscience and social science, so I'm very much a product of both of them.

Charley Morton: So you're all about the science, too?

Tiffany Shlain: Yes. The science is evidence to prove what we already know to be true. It backs it up.

Charley Morton: Do you think it's been harder for you as a woman to pursue the things you've wanted to do?

Tiffany Shlain: No. Not at all. I know it is for a lot of women. But I was raised by two feminist parents and I just never thought for a moment I couldn't do these things. My father always had great respect for what I said, so I never had fears about that.

I feel very comfortable being the only woman in the room, which is often. But at this point in my career, I've worked at my craft long enough, and thought about these ideas enough, that when I do speak about them, I've really been through it—which I love about getting older!

I want to do everything I can to make more young women feel that way, not just when they're young, but throughout their lives.

Tiffany Shlain: I try to lead my life in a way that shows other women how to have a career and also be a mother. For example, in our family we have a Technology Shabbat—we take a full 24-hours with no screens in our lives. I talk about this a lot to show people how we can live in the world and still make precious time with your family.

Charley Morton: Do you have any advice that you'd give to young people growing up today?

Tiffany Shlain: All the things that make you unique are your superpowers. Strength and power come in all different forms. Whether your strength is that you're really good at reading people emotionally, or good at math, or you love music or art.

Charley Morton: That can be hard for a kid!

Tiffany Shlain: It's just something you have to keep reminding yourself! There are things I struggle with, inside myself. I look at them as things I need to work on but they're also my gifts.

When we were making the film, The Making of a Mensch, that was one of the biggest takeaways: things that are positive or negative can be dialed up, or dialed down. So if, say, someone is generous, that's amazing. But if you're too generous and you don't keep anything for yourself, that's not good for anyone.

Or jealousy—which I'm sure everyone feels is a bad thing. But if you have a friend who just got into a great college and her achievement motivates you to work harder, that's a plus.

A little jealousy [in that case] can motivate you to do better. Every character quality has a good and bad side to it. You just have to figure out which it is!

Tiffany Shlain: I'm trying to do my part to help evolve the conversation.

I feel like, in our world, we hear a lot of negative views. We hear mostly about the negative things that are happening. But you can't only listen to that or else you'll think the world's going to pieces, and it's not. It's all a question of perspective.

So, much of this process actually starts with you—it may seem like we have all these big, insurmountable problems, but if you start with yourself and work outward to your community and the world.

I'm doing my little part to evolve that point of view through all these films, all these different conversations. Through film, I hope to encourage people to take a pause from their very busy lives and watch a movie, then to have a deep discussion about what it means to be human in the 21st century.

If I can add just a little bit to that conversation, I am doing what I'm supposed to be doing in this world.

Most of the films in Hollywood and what I grew up with used a story to hold an idea and to explore. My films really take on the subject head-on. We're not trying to embed them in a story. Instead it's, let's really talk about who you are and who you want to be—and what are the tools to get there.

It's very exciting to be involved in something on that big of a scale. Join us! 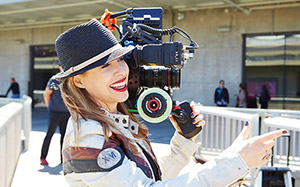 Tiffany Shlain starts big conversations through her films. Check out more below or follow her on Twitter @tiffanyshlain.

Character Day is an annual global day to discover who we are and who we want to be in the world.