Can Science, Art and Technology Help Us Soar Past Our Limitations?

Science and technology may deliver human superpowers. Will these make us better/stronger/smarter/faster?

I have always loved Japanese comics (manga) and the animated versions (anime) on Cartoon Network's Toonami. One of the most influential manga and anime in existence is Dragon Ball and its sequel, Dragon Ball Z, and now the ongoing Dragon Ball Super. Written and illustrated by Akira Toriyama, it follows the adventures of Son Goku, a kid from a different planet who was sent to Earth to destroy it. But when Goku bumped his head and lost his killing mission, he was just like any other kid, and an old man found him and took him in as his grandson. Always having latent potential, Goku surpassed his limits through martial arts and gained epic strength and power, which he uses to defend the Earth, his adopted home. By mastering the art of ki-control, Goku acquired astounding abilities that include flying and superhuman strength. A main motif in the manga is surpassing one's limitations through incessant training and hard work.

Can technology and science enhance our own latent potentials, as martial arts and ki-control did for Goku? What if we were all on the verge of becoming superheroes with greater-than-mortal powers?

Only Five Senses: What Are We Missing?

After all, one can only see so far. We can only hear so well. If we get sick, we all but lose our sense of smell. However, there are some instances where people are able to do some super things. When my sister was pregnant, she exhibited an uncanny sense of smell. Her nose was very keen to a variety of aromas but particularly the smell of fish. She once smelled the salmon we brought home before we even entered the house. While this does not necessarily indicate superhuman powers, it does show that what we experience through our body, brain, and senses may depend on many different factors.

Still, our human bodies have limitations. Physically it is a mortal vessel with limited senses, depriving us from experiencing whatever lies beyond what our senses can detect. What outside our perception are we missing?

Humans seem to be lacking in the extraordinary anatomy department contrarily to the senses of some of our animal counterparts.

Take the extrasensory abilities found in the bird kingdom, for example. A hawk's vision is eight times more acute than a human's, owing to its many more photoreceptors, an indented fovea and even a second set of eye muscles. This anatomical bonus gives hawks and other birds of prey the sharpest eyesight in the world.

A common misconception is that bats are blind. This is untrue, as they see perfectly well, but it is their hearing that is incredible. Some bats are capable of echolocation, creating ultrasounds in the form of high-pitched squeaks that are far too high for humans to hear. When these squeaks' sound waves hit an object, they bounce back, alerting the bat to the object's location. So they hear, rather than see, where they are going, or what obstacles might be in their path. For nocturnal bat hunters, this is an ideal adaptation.

Evolution has resulted in amazing creatures with amazing abilities. An electric eel is a swimming battery with its positive head and its negative tail. Lizards can grow back their tails, and a species of jellyfish is literally immortal. What has evolution yielded the human being? In this case, arguably our most valuable asset is not our eyes or ears, nor even our opposable thumbs, but that enigmatic organ between our ears, our brains.

Can we use this gift of intelligence and curiosity to gain some superpowers of our own? Can our unique frontal lobes, with their ability for discovery, creativity and critical thinking, help us to expand beyond our bodily limits? Maybe not superpowers as extreme as immortality, but perhaps practical powers for overcoming other physical handicaps, like letting the blind see or the deaf hear.

This is no longer the realm of science fiction. Artists and bioengineers have been working collectively to make lifelike bionic limbs capable of sensation. Researchers at Princeton and Johns Hopkins University are using 3D printing to construct human body parts such as ears, muscles and even bones. Retinal implants give the blind the ability to partially recover sight. Cochlear implants are allowing the deaf to hear for the first time. Everywhere technology is aiding people to hurdle their limitations and acquire better conditions of living.

These are important advances, but what technological and scientific changes are taking place as we move towards human enhancement? After giving the blind sight, bioengineers' natural next step as innovators may be to give humans eyesight equivalent to a hawk. Imagine night vision without special goggles or lights. Twenty years ago, this would have seemed the stuff of science fiction, but at the rate of technological change today, nothing seems impossible.

And how does that impact society? Advancements that expand human capabilities, and perhaps even life spans, will undoubtedly be costly, possibly further separating the wealthy from the rest in accessing these superpowers.

Ethically, who will decide who can access these types of advancements or not? What's to keep these technologies from being put to uses for which they were not necessarily designed—to power indestructible soldiers, or immortal humans, for example? Or from re-engineering the brain to resist injury or disease? In that case, a Goku with a killing mission might not be deterred by a head injury, and our one lonely planet might be at risk of destruction—from those on it, or beyond.

As technology and science move forward, we will be faced with new complications alien to anything we've ever had to think about before. What happens to moral reason, empathy and compassion when humans enhance our own immortality? 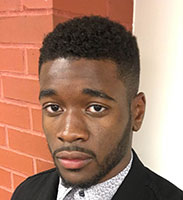 Jared Robinson is majoring in animal science at Tuskegee University. He writes for the Campus Digest, the student newspaper.

More Stories from The Inventing the future