Charley has just begun to plot her next adventure, a journey forward from Leonardo’s time to a period where the world was unevenly wakening to what it means to be fully alive, fully human. In the early to mid-1700s, most of humanity (at least in the Western world) was still firmly in the grips of the Inquisition, plague and superstition. This was pre-Revolutionary America or France, where the Rights of Man (but not Woman) had yet to be enunciated.

But hope and change were in the air.  The thrill of examining another moment in time where brilliance and genius could bubble up, where scientific thought,  and debate were leading us to new innovations that would help define our own post-modern world, is about to draw our girl Charley back into adventure like a moth drawn into flame. 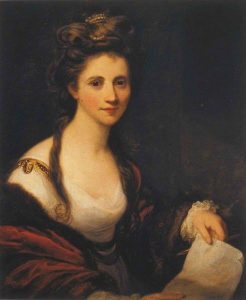 As we start to look at the time of Voltaire, Diderot and the kings of Divine Right in France, there is another pioneer and “brainiac” of the period whose flame has been dimmed by history because–gasp–she is a woman. If Charley has any say about it, la Marquise Emilie du Chatelet is about to get her due.

Meanwhile, a look at the satirical brilliance of Voltaire, Emilie’s consort and intellectual partner, from a modern musical theater performance adapted from his novel, Candide, ou l’Optimist, from a 2011 blog post on my Pass the Talking Stick blog.

What do we really know, after all?

I went to see Candide last night – a musical opera based on Voltaire’s famous satirical novel (“All is for the best in the best of all possible worlds”) set to Leonard Bernstein’s music. It was a fabulous production by The Shakespeare Theatre in Washington, D.C.

Bernstein decided to undertake the adaptation in 1953 upon the advice of his friend, playwright Lillian Hellman. At the time, Hellman was one of many artists, scientists and intellectuals under investigation by the U.S. House of Representatives Committee on Un-American Activities, the noted McCarthy hearings against alleged Communists. Hellman was one of many artist victims of this modern day witch hunt.

Voltaire’s 1758 satire of the institutions that held enormous sway over public opinion in his time – from the Catholic Church to the emperors, from physicians to philosophers – were intent on trying to impose their dogma, and control on the public. Even when the facts didn’t line up with teachings – the inconvenience of the Inquisition being a notable breach of Christian spirit, for example – it was all for the best! In a contemporary parallel, some politicians of our day insist that our country’s Founders had God and right on their side in the original framing of the U.S. Constitution — and that they are the special people who can read he Founders intentions correctly and prune our laws of anything that the framers and their successors didn’t really intend, except those parts that don’t suit their current ideology. No hypocrisy there!

As the French themselves are fond of saying, Plus ca change, plus c’est la meme chose. What struck me about the “philosophy” behind Voltaire’s mocking words was how the best knowledge of his day had much of the science wrong. The best medicine then promoted bleeding (leeches) to cure disease, the auto-da-fe to “purify” religion, and Optimism as a philosophical explanation for every Job-like tragedy that befell the world and poor Candide, including earthquake, war, plague. What do we “know” today that will lead the scientists and philosophers 300 years from now to conclude that our best practices are equally misinformed?

It would seem that skepticism – questioning what is generally accepted as fact – is actually a healthy approach to counter the conventional wisdom. Candide’s teacher, Professor Pangloss, tenaciously holds to his optimistic philosophy (“All is for the best in this best of all possible worlds”) despite suffering these personal trials and tribulations: war, poverty, beatings, earthquakes, Auto-da-fe (the Inquisition’s infamous public heretics “trials” which inevitably ended up in conviction and public execution), hanging and, finally, destitution. Equally, today, we might be skeptical of the absolutists who claim to “know” what is best for our country, for our children and for our future.

Fortunately, technology, communication, transportation and a healthy public debate in our democracy promote ever greater tools to engage in public skepticism. Through the Internet, television, social media, ever-more transparent government and the free press, Americans now have more power than ever to question, debate, learn and challenge the status quo.

Still, it is tempting to stay out of the debate and “cultivate one’s garden”, as Candide concludes at the bitter end of his story. By this time, Candide’s one true love, the Lady Cunegonde, has lost her station, her beauty, her youth and her wealth. To engage in the conversation – to challenge conventional wisdom publicly – may leave one subject to ridicule or worse. But, as in Voltaire’s time, satire can be a biting tool that, on the face of it, seems to endorse the authorities whose knowledge is “beyond question” while mocking their hypocrisy.

A musical highlight of Candide is the lovely Cunegonde’s famous comic soliloquy, “Glitter and Be Gay”, lamenting that a lady of high nobility stripped of her title, wealth and family should become the sexual object for everyone from Catholic Cardinals, to the City of Lisbon’s wealthiest and most influential men in exchange for baubles and expensive clothes. True to the teachings of Professor Pangloss even in the most horrific circumstances, Cunegonde searches for the best in the situation.

The aria is here performed by the incomparably gifted actress Kristen Chenoweth. Her high E-flat is a Wicked feat!